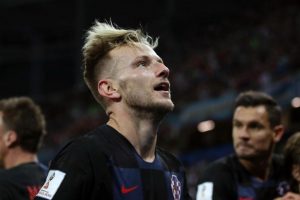 Croatia needed penalties to make it through to the quarter-finals of the World Cup after fighting off a brave Denmark side in a tense encounter at Nizhny Novgorod.

It looked like it was going to be Denmark’s day when Kasper Schmeichel – who was equal to two of Croatia’s penalties – also saved Luka Modric’s spot-kick moments before the end of extra-time.

But Danijel Subasic managed to save spot-kicks from Christian Eriksen, Lasse Schone and Nicolai Jorgensen to ensure Zlatko Dalic’s men will face Russia on Saturday evening.

The game got off to an electric start as both sides got on the scoresheet inside the opening five minutes.

Mathias Jorgensen gave the Danes a surprise lead with barely 60 seconds on the clock after Croatia failed to deal with a long throw-in and the centre-back scrambled the ball underneath Subasic who should have done better.

However, Mario Mandzukic levelled the game moments later when the ball fell rather fortuitously into the path of the Croatia frontman after a Henrik Dalsgaard’s clearance rebounded off Andreas Christensen’s head.

Neither side could find the net after that as the game went into extra-time.

It was a cagey extra 30 minutes but Croatia missed a glorious chance to snatch the win when they were awarded a penalty after Ante Rebic was fouled in the box by Jorgensen. But Luka Modric was unable to take advantage as Kasper Schmeichel brilliantly saved the spot-kick.

However, it would be Croatia who would have the last laugh as they emerged 3-2 winners on penalties.

The stage was set for the likes of Rakitic, Modric or Eriksen but the game produced an unlikely hero in the form of Subasic.

Both keepers were on brilliant form, but it was the Croatia glovesman who was equal to three Danish penalties in the shootout which was decisive in winning the game.

MOMENT OF THE MATCH

Although it did not lead to a victory, Schmeichel’s save on Modric could be seen as one of the most dramatic moments from these incredible World Cup finals.

The Leicester man got down brilliantly to his left to force the game into a shootout as his father, the great Peter Schmeichel, celebrated the save in the stands. To Modric’s credit, he stepped up in the shootout and got the better of his adversary at the second time of asking.