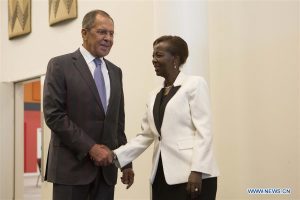 Russian foreign minister Sergey Lavrov arrived on Sunday morning in the Rwandan capital Kigali for one day official visit, intended to strengthen the bilateral relations between the two countries.

Russia and Rwanda are looking forward to further boosting bilateral cooperation in areas that support the economic development of Rwanda, said Lavrov at a news conference shortly after meeting with his Rwandan counterpart Louise Mushikiwabo.

“We see great advances in trade and economic cooperation between Russia and Rwanda. We are planning closer bilateral cooperation in areas of mining, agriculture, medicine, defence, ICTs and education and training,” he said.

Russia sees Africa as an “important cornerstone” in the formation of the new world order, said the minister, adding that the two sides have decided to continue cooperating closely with UN, and help resolve conflicts on the African continent.

“Rwanda wishes to collaborate more with Russia, especially in fostering peace and security on the African continent,” said Mushikiwabo.

Russia could play a crucial role particularly in peacekeeping in Africa, she said.

During his visit, Lavrov visited Kigali Genocide Memorial Center to honor the victims of the 1994 genocide against the Tutsi, and also held a bilateral meeting with Rwandan President Paul Kagame at the office of the president.

This year marks the 55th anniversary of bilateral relations between Rwanda and Russia.

Presently, Rwanda collaborates with Russia in the fields of education and training, military and defence, ICTs and mining, according to the Rwandan foreign ministry.

About 800 Rwandan students have graduated from Russian universities over the last 50 years in various disciplines including law, medicine, international affairs and political science, figures from the Rwandan embassy in Russia show.