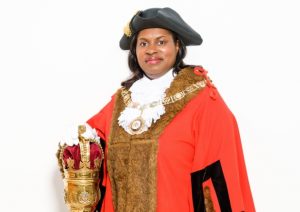 The new mayor of Barking and Dagenham has been selected.

In a ceremonial council meeting on May 25, Councillor Sanchia Alasia from Alibon ward was appointed in the post.

As mayor, she’s promised to promote diversity and inclusivity, especially in relation to disabilities.

She said: “I’d like to have a theme of inclusivity throughout the year, and to ensure those with invisible disabilities are included in the work I do. “I’ve decided to have two mayoral advisors around disability so that I can make sure they’re integrated into the work I do.”

In her speech, Cllr Alasia outlined the three charities she plans to work with – The Pennu Charity, which combats loneliness amongst the elderly, Afruca, which campaigns for the welfare of African children, and Endometriosis UK.

“I was diagnosed with Endometriosis in 2010,” she said.

“There are many other women who suffer from this, and this charity gives us vital support.”

Outgoing mayor Cllr Abdul Aziz paid tribute to the new mayor, and thanked those who had supported him in his work.

He said: “It has been my greatest honour over the past year to have represented the council as your mayor. I want to thank the organisations who have given me the honour of attending their functions and events. I am very grateful for their friendship.”

Others councillors congratulated Cllr Alasia, paying tribute to her frequent social media use, as well as her work in Europe. She stood to become an MEP in 2014, and is an equality and diversity manager at Brunel University London. She will be the first Caribbean woman to hold the post.

Cllr Dominic Twomey said: “I first met Sanchia in 2008 when we were both in Alibon ward. When we came together when we had the BNP as our major opposition, we felt a shame in how the far right had infiltrated a borough we’d both lived in and loved.

“My early memories of Sanchia was pounding the streets in all weathers, occasionally saying no to council leader Darren Rodwell when he tried to get us out in the snow.

“When she does something she does it to her full ability, and that commitment is always there.”