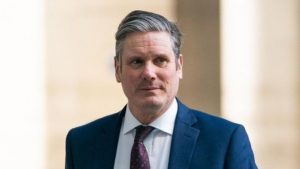 Sir Keir vowed to set up an independent complaints process and asked for a report on all outstanding cases within the week.

The four groups said the new leadership had made a “good start”.

Sir Keir apologised to the Jewish community for anti-Semitism in Labour’s ranks in his acceptance speech on Saturday, promising to “tear out this poison by its roots”.

On Tuesday, he also wrote an article in the Evening Standard, saying he wanted to “acknowledge the pain and hurt” his party had caused the Jewish community in recent years.

Labour has been plagued with allegations of anti-Semitism since 2016 and is being investigated by the Equality and Human Rights Commission.

Mr Corbyn held an internal investigation early on in his tenure, but it was widely-criticised by Jewish members of the party, with a number – including MPs – leaving over his handling of the row.

During the Labour leadership race, Jewish groups said the winner needed to tackle the issue straight away, with the President of the Board of Deputies of British Jews, Marie van der Zyl, calling for all outstanding cases to be resolved within four months.

The video call on Tuesday included representatives from the Board of Deputies, the Jewish Leadership Council, the Community Security Trust and the Jewish Labour Movement.

Sir Keir said he “repeated once again the apology I made as soon as I was elected leader”, made further promises to cooperate with the human rights commission investigation and pledged to roll out training to all Labour Party staff.

He added: “Over the last few years, we have failed the Jewish community on anti-Semitism.

“Labour is a proudly anti-racist party and, going forward, it will not be enough to ‘pass the test’ on anti-Semitism. We need to set new standards for best practice.”

The leaders of the four groups who took part in the call issued a joint statement afterwards, saying they wanted to have a “normal relationship with Labour whereby we can discuss the full range of issues affecting our community”.

They added: “While we would have fully understood the need to focus entirely on coronavirus at this time, Keir Starmer has already achieved in four days more than his predecessor in four years in addressing anti-Semitism within the Labour Party.

“This has certainly been a good start. If the new Labour leadership continues in this way, we can work together to make the changes that will make Labour a proudly anti-racist party once again.”

“He has recognised there is only one thing that matters and that is action.

“I hope he will indeed take swift and decisive action to eradicate the scourge of anti-Semitism from within the Labour Party. ”