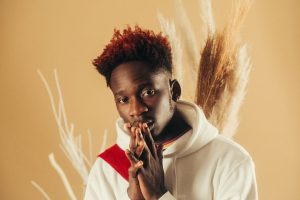 Banku Music boss, Mr Eazi has teamed up with Giggs, Mr Real and Slimcase for his latest singles.

Mr Eazi has been cementing his Uncle London status with UK charting hits (Decline, Bad, Bad Vibe) over the last few months and now the Happy Boy is ready to give us a sneak peek of his forthcoming EP ‘Life is Eazi, Vol. 2 – Lagos To London’ with the banger ‘London Town.’

E-Kelly worked his production magic to create a rhythmic beat that adopts the dark Southern African drum patterns with the warm bounce of original Nigerian melodies.

This musical collective layer their bars and tag team between each other to create a catchy tune that you can’t help but press repeat on.

Catch Mr Eazi on tour dates across the world during his Happy Boy Tour 2018.