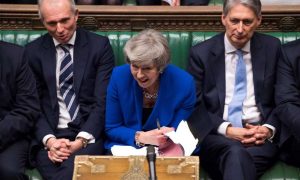 © AFP/Getty Images Theresa May during prime minister’s questions before the debate and vote on a motion of no confidence in the government.

Jeremy Corbyn has failed to force a general election after rebel Tories and Democratic Unionist MPs backed Theresa May’s government in a vote of confidence just a day after rejecting her Brexit deal.
Labour’s motion of no confidence, which was tabled on Tuesday night, was defeated by 325 votes to 306, giving a majority of 19.
Winding up the debate for Labour, its deputy leader, Tom Watson, said May would forever be known as “the nothing-has-changed prime minister”.

“No one doubts her determination, which is generally of an admirable quality, but, misapplied, it can be toxic,” he said. “And the cruellest truth of all is that she doesn’t possess the necessary political skills, empathy, ability, and most crucially, the policy, to lead this country any longer.”
The environment secretary, Michael Gove, responded with a robust speech, praising May’s “inspirational leadership” and attacking Corbyn on a wide range of issues, from antisemitism to foreign policy.
LIVE: Reaction as May survives no-confidence vote
One former Labour MP, John Woodcock, who resigned from the party after being investigated for sexual harassment, voted with the government, saying Corbyn was “unfit to lead the country”.
After May suffered a heavy defeat on Tuesday night – the 230-vote margin against her Brexit deal was the biggest in modern parliamentary history – she announced immediately that she would welcome a confidence vote.

Had the motion passed, MPs would have had 14 days for an alternative government to emerge that could command a majority in the Commons, otherwise a general election would have been triggered.
Brexit in-depth: All the news, analysis and expert opinion
Instead, May will now begin talks with what she has called “senior parliamentarians” from across the parties to establish what kind of Brexit deal could win the backing of the Commons.
However, Downing Street has suggested she is unlikely to negotiate directly with Corbyn, and that her Brexit red lines – including a refusal to countenance a customs union – remain in place.
A spokesman said: “The principles that govern us as we go into these talks is that we want to be able to do our own trade deals, and that is incompatible with a customs union.”
Corbyn tabled the no-confidence motion immediately after May’s Brexit defeat, alongside other opposition leaders including the Scottish National party’s Ian Blackford and the Liberal Democrats’ Vince Cable.
In the debate on Wednesday, Corbyn accused May of presiding over a “zombie government”.

He is now likely to come under pressure from party activists to move towards supporting a second referendum. A group of more than 70 Labour MPs announced on Wednesday morning that they were backing the call for a “people’s vote”.
Labour’s formal position, adopted at its conference in Liverpool last year, commits the party to press for a general election. Failing that, all options are on the table, including that of campaigning for a second referendum.