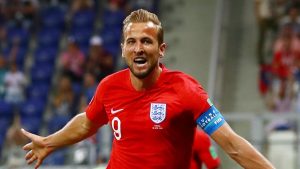 Captain Harry Kane scored twice, including an injury-time winner, as England battled to victory over Tunisia in their opening game of the World Cup.

Kane nodded home from close range in the 91st minute following Harry Maguire’s flick-on from a corner, adding to his opportunistic finish in the first half in Volgograd.

Manager Gareth Southgate has instilled a feel-good factor in the side since taking over in November 2016 and England’s youngest team at a World Cup since 1958 showed flashes of thrilling attacking football, although poor finishing almost proved costly.

Their speed caused Tunisia plenty of problems as Jesse Lingard had a close-range shot brilliantly saved by Mouez Hassen and Raheem Sterling scuffed a shot wide in the first five minutes.

England made a deserved breakthrough in the 11th minute through Kane after Hassen brilliantly kept out John Stones’ header.

Despite being on the back foot, Tunisia equalised through Ferjani Sassi’s penalty after Kyle Walker was adjudged to have elbowed Fakhreddine Ben Youssef.

Hassen suffered an injury and was replaced by Farouk Ben Mustapha, who saved well to keep out a Maguire header, while Dele Alli headed against the crossbar and Lingard poked a shot on to a post.