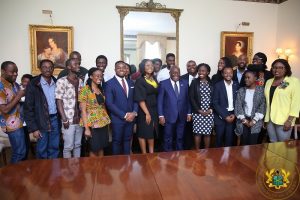 President Nana Addo Dankwa Akufo-Addo says the use of some of the country’s oil revenues to fund the Free Senior High School policy, thereby guaranteeing all Ghanaian children access to senior high school education, is most appropriate.

According to President Akufo-Addo, “we are using some of the income from our oil revenue to fund the programme. I believe strongly that this is the most equitable and transparent use of the oil revenue, instead of it finding its way into the pockets of politicians and bureaucrats.”

As a result of the implementation of the Free SHS policy, the President stated that his Government is laying a strong foundation for an educated and skilled workforce of the future, adding that “we are investing in our future scientists, engineers, modern farmers, innovators, entrepreneurs, and transformation agents!”

President Akufo-Addo made this known on Friday, 11th May 2018, when he delivered the keynote address at the 2018 Oxford Africa Conference, at the University of Oxford.

This year, the Akufo-Addo government has announced that it will spend some GH¢453 million ($103 million) of the country’s oil revenue on funding Free SHS, more than double the amount spent last year on funding the policy.

Addressing the gathering on the theme “Enough Rhetoric: Catalysing an Era of Concrete Action”, the President stated that his administration has embarked on shifting the emphasis in education to ensure that science, technology, engineering and mathematics drive all sectors of the economy.

“We are committing resources to basic and applied science and engineering to ensure that we can meet the critical need for technicians and engineers. This process also encompasses a scaling up of technical, vocational and education training to supply the skills needed to build a modern economy,” he added. 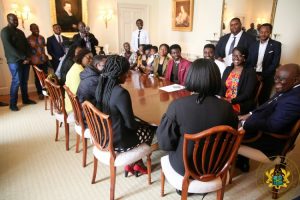 President Akufo-Addo stated that the ratification of the Continental Free Trade Area agreement by the Ghanaian Parliament would mean that the era of low volumes of intra-continental trade that have defined the activities of the African economies will come to an end.

“Up till now, trade between African regions has remained low compared to other parts of the world. In 2000, intra-regional trade accounted for 10% of Africa’s total trade and increased marginally to 11% in 2015. Trading amongst members of the European Union, for example, amounted to 70% in 2015,” the President said.

He noted that with Africa’s population set to increase from 1.2 billion to 2 billion in 20 years time, an increase in intra-regional trade in Africa is the surest way to develop fruitful relations between African countries.

This market, he explained, will present immense opportunities to bring wealth and prosperity to the African people, with hard work, ingenuity, innovation and enterprise.

“It will mean a rapid increase in exchanges of our agricultural, financial, industrial, scientific and technological products, which would enhance dramatically our attainment of prosperity, and the prospects of employment for the broad masses of Africans, particularly our youth. Our economies would then be shaped not by the production and export of raw materials, but by the things we make,” he added.