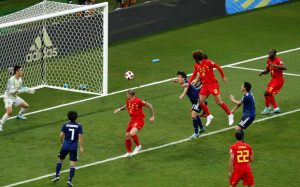 Nacer Chadli was Belgium hero with a last-minute winner to knock Japan out of the World Cup.

Genki Haraguchi and Takashi Inui had put Japan in dreamland before Vertonghen and substitutes Marouane Fellaini and Chadli sealed a quarter-final date with Brazil.

Belgium made a promising start, with both Romelu Lukaku and Eden Hazard testing Japan goalkeeper Eiji Kawashima as the Europeans dominated possession.

Japan successfully resisted the pressure as Roberto Martinez’s team struggled to deliver the final ball they required on several occasions.

An error by goalkeeper Thibaut Courtois almost saw Japan take a surprise lead on the stroke of half-time, missing a routine collection to spill between his legs before reacting and gathering it near the goal-line.

It was a much different story after the break as Genki Haraguchi put Japan 1-0 up minutes after the restart. A swift counter-attack saw Jan Vertonghen to miss an interception as Haraguchi ran through and finish first-time in the bottom left corner.

In the 52nd minute they doubled their lead through Takashi Inui’s second goal of the competition, latching onto Shinji Kagawa’s pass to beat Courtois from the edge of the area.

Roberto Martinez reacted by bringing on Nacer Chadli and Marouane Fellaini and the latter played a key part in Belgium’s revival.

Shortly afterwards Vertonghen’s header back across goal looped under the crossbar for a fortunate finish before Fellaini headed home Hazard’s cross to level the scored 22 minutes after Inui’s strike.

Chadli was then denied with a header from eight yards before Lukaku should have scored from a similar position.

The West Brom forward made no mistake in injury time, finishing off a 94th-minute counterattack to clinch the win.